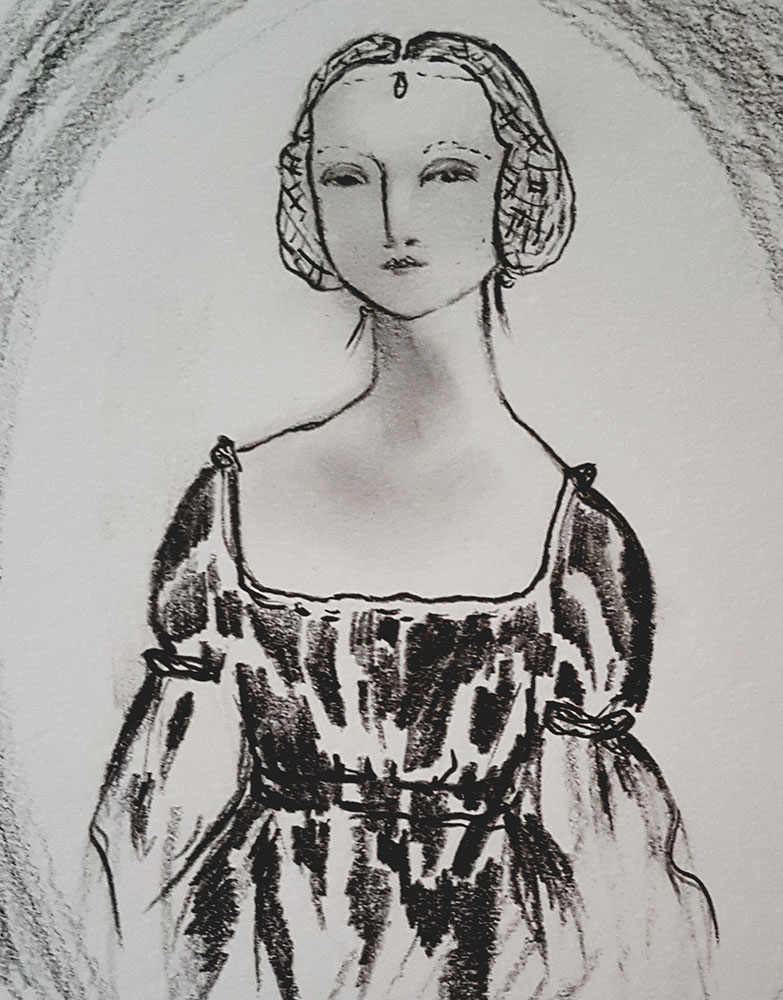 Caterina was born in Milan, in the sophisticated and elegant Ludovico the More’s court. She was beloved daughter to Galeazzo Maria Sforza and his favorite, the beautiful lady in waiting Lucrezia Landriani. 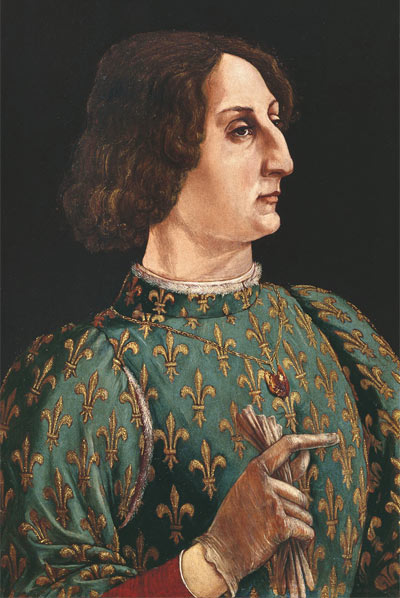 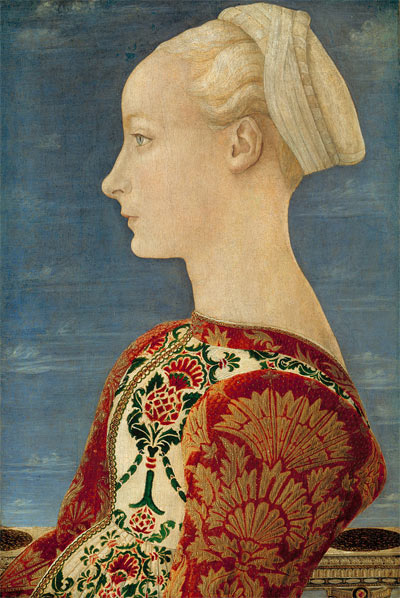 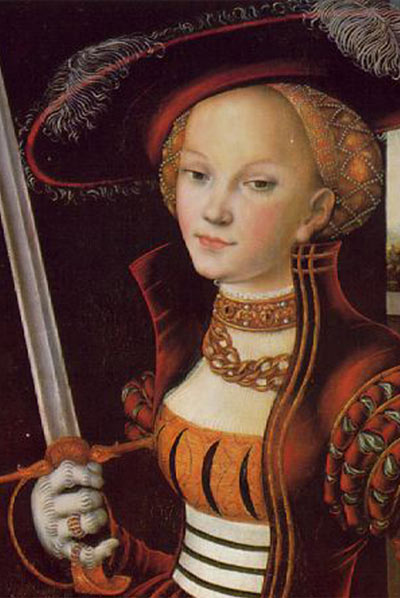 In the Sforza Castle of Milan…
Caterina was educated by her fatherly grand-mother Lady Bianca Maria Visconti in the lively and refined court with major poets and writers of the Italian Renaissance, she was used to spend the summertime in the Sforza estates of Pavia.
She learned about her glorious family ancestors who were skilled strategists and captains… The Sforza founder was actually Muzio Attendolo a venture Captain from Cotignola of Ravenna (Romagna) who was thanks to his enterprises as fearless leader, nicknamed “Lo Sforza” (tr. – the tough man – Italian verb: sforzare – to struggle).
Bianca Maria and his son Galeazzo Maria Sforza actually conveyed her their passion for warfare and hunting and tought her the art of ruling.

The Sforza’s castle in Milan 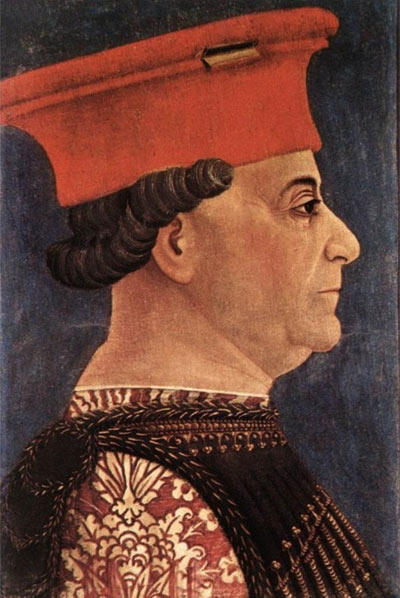 When she was just 13 y.o. she was to marry Girolamo Riario, Pope Sistus IV’s nephew, according to Macchiavelli reports “a being of very low and vile condition”. They together reached Riario’s domains in Romagna, Caterina first reached Imola escorted by a regal and opulent cortege with ladies in waiting and knights. She undertook her role as Lady of Imola. They eventually went back to Rome in Campo de’ Fiori palace, as husband Count Riario was to serve the Pope his uncle.

Girolamo and Caterina achieved also the Lordship of Forlì, formerly ruled by the Ordelaffi family, it was reported to be a rebel to Church government.

Caterina was described by her contemporaries as a sophisticated, beautiful and witty woman, in particular Forlì citizens got well impressed and appreciated her. She gave birth to her first-born son Ottaviano.
During her journeys and stay in Rome, Girolamo wanted Caterina to be beautiful and bold, the nobles of Rome talked about her beauty, elegant manners as well as her tough and authoritative temper and self-confidence.

Caterina is now being described by her contemporaries as a sophisticated, beautiful and witty woman, in particular Forlì citizens got well impressed and soon appreciated her. She gave birth to her first-born son Ottaviano.
During her journeys and stay in Rome, Girolamo wanted Caterina to be beautiful and bold, the nobles of Rome talked about her beauty, elegant manners as well as her tough, authoritative temper and her self-confidence. 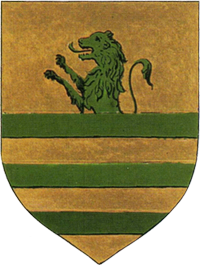 The Ordelaffi’s coat of arms

Pope Sistus IV died and his enemies took advantage of the situation. Riots erupted everywhere in Rome. The Riario Palace in Campo de’ Fiori was sacked and almost destroyed, so Caterina along with a small crew of trustworthy men found shelter in Castel Sant’Angelo, one of her husband’s estate, she locked the castle door and waited… she was determined to give the castle back only to the newly elected Pope. 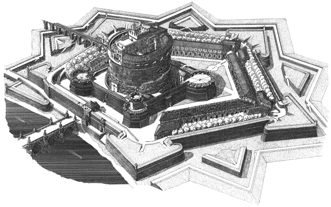 The cardinals feared the fire weapons of Caterina’s crew, so they refused to join in the conclave and kept waiting, at the same time they took agreements with Riario who was waiting out of Rome. They promised him money and the domains that formerly belonged to him in Romagna, so he gave up. Caterina disappointed by the betrayal of the husband and exhausted for the advanced pregnancy had to give up too.
After 12 days she left Castel Sant’Angelo and reached her Romagna domains. 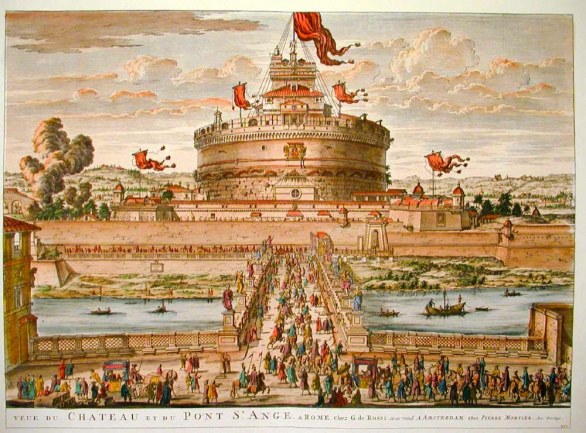 In Forlì people were not happy of the ruling policy of the Riarios. The high taxes and the dictatorial manners of Girolamo brought enemies to join together against the rulers.

On the night of April 14. 1488 while Caterina was caring for the children with the nanny and the servants a man of the noble Orsi family, that was a rich and important family of Forlì, assaulted the Riario Palace that was in the main Forlì square. Girolamo was stabbed to death and thrown out of the window, his corpse was eventually dismembered by the wild crowd.

Caterina escaped and took shelter in the Ravaldino Fortress that was held by Tommaso Feo. She convinced the Orsi to let her in because she made them think that this was the only way to get the fortress for giving it to them. She entered and took the fortress for herself instead. She eventually organized her troops and arrested the traitors and their families.

The legend tells that the Orsi who had taken her children as hostages were trying to scare her in order to get her out of the fortress but she climbed up the walls and showed them her pubis screaming “…come on… don’t hesitate, get them killed I’ve got here the mold for many others…”. The Orsi were so much impressed by her bravery that they were forced to give up thus Caterina and her children gained control again of the fortress. 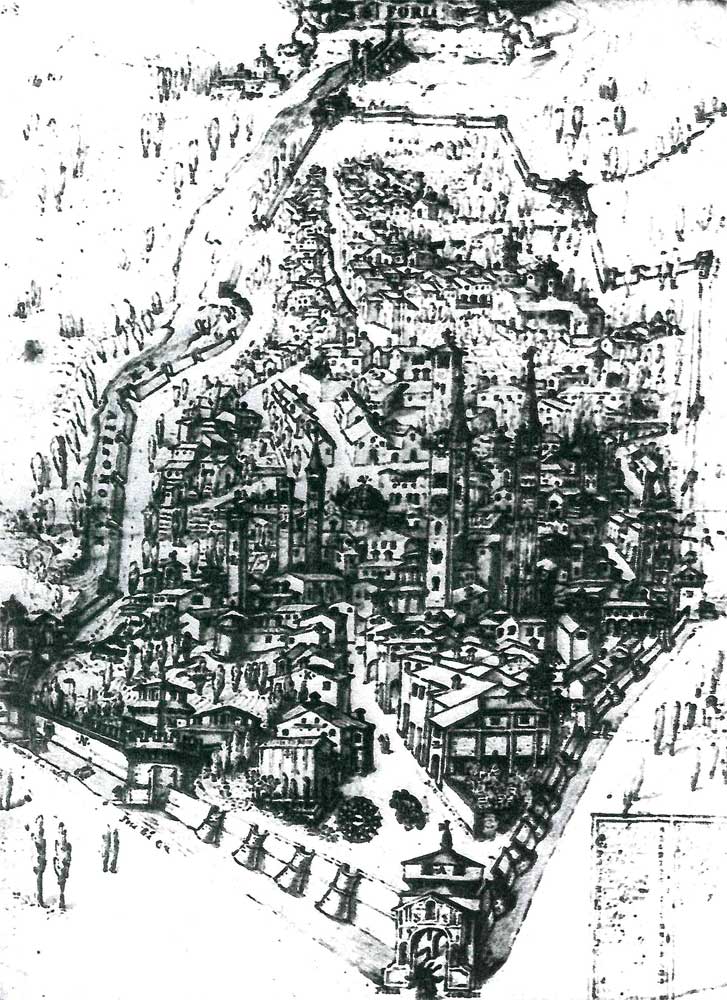 A view of medieval Forlì

Caterina ruthlessly pursued the traitors and their families and many were killed. She eventually became the Signora of Imola and Forlì. She started ruling alone over the Romagna domains.
Her revenge was particularly cruel, not only the building of Senior Orsi was burned and destroyed but also all the houses and minor residences owned by his relatives that were located in the area nearby it. In the Forlì historical district the lane in which the main Orsi building was destroyed is still exhisting as Via Guasto degli Orsi. (tr. Orsis’ mischief lane).

Together with her loyal apothecary from Forlì Lodovico Albertini she studied and created remedies and beauty recipes by mixing herbs and essences and making alchemy combinations. In the Forlì fortress days went by slowly and Caterina was engaged in attending delegations, he administration of the state and looking after her children. 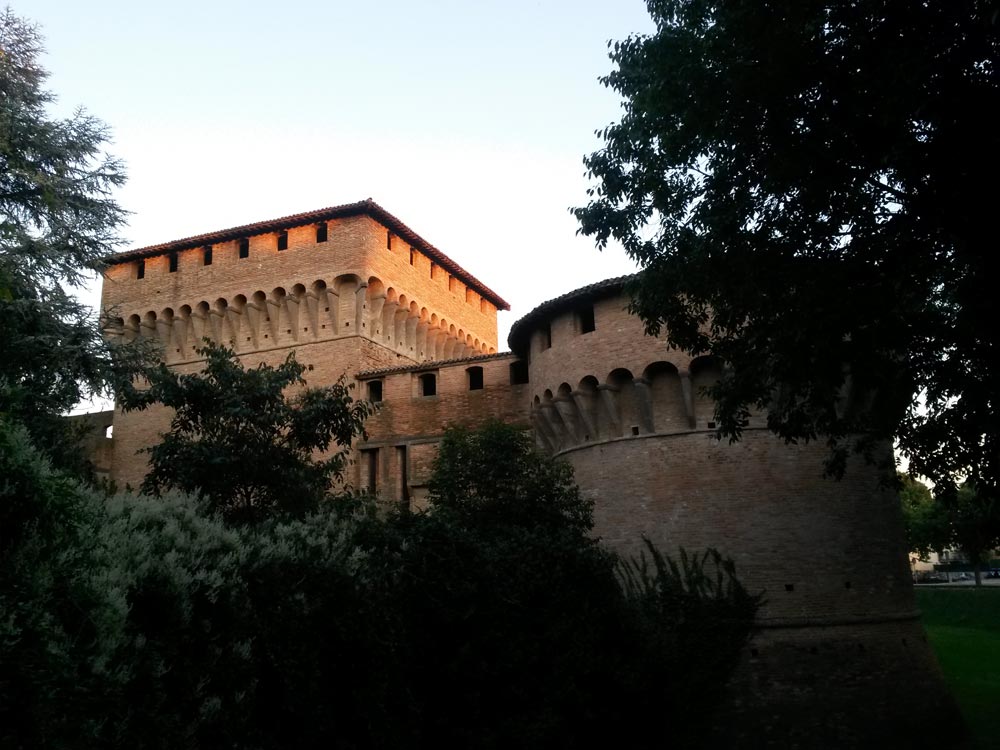 Caterina fell in love with Jacopo Feo, brother to the castellan of Forlì fortress.

Caterina fell in love with Giovanni De’ Medici, young and good-looking ambassador and commissioner of all Florence domains in Romagna. She married him secretly and in 1498 she had a son called Ludovico Giovanni de’ Medici, John of the Black bands. 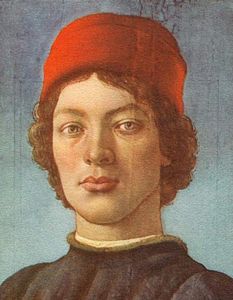 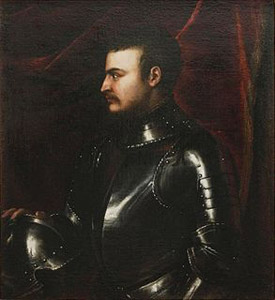 John of the Black bands

In the same year Giovanni died of infection, Caterina was again a widow but with the most important and influential relatives in Europe: De’ Medici family.

The king of France Louis XII in league with the Pope Rodrigo Borgia, decided to declare war to the Italian states. He firstly conquered the Dukedom of Milan while the Pope claimed the Romagna domains for Cesare Borgia, “the Valentino” his son. 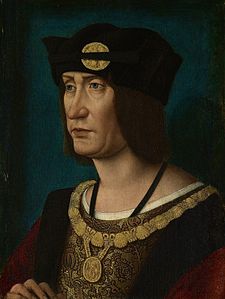 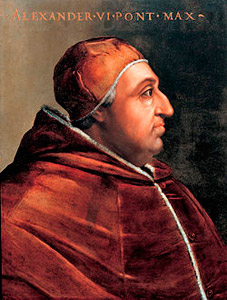 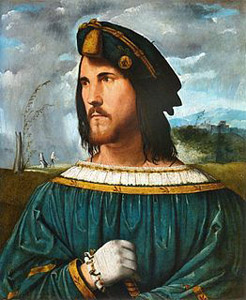 In the meanwhile Caterina applied in vain for a military support from Florence, she locked herself in the Forlì fortress, she sent her children to Florence and she prepared herself and her soldiers for the siege, the fortress being considered since ever as unconquerable.

19 dicembre – He entered in Forlì and started bombing the fortress, the battle of Forlì had started!

Niccolò Machiavelli reported that the proud and bold Caterina withstood the siege alone being admired for that all over Italy, but nobody came to help her.

Cesare Borgia kept bombing and conquered the Forlì fortress. Caterina became a prisoner and was brought to Rome, locked in Castel Sant’Angelo jails. She was mistreated and even tortured. She eventually was charged with having tried to poison the Pope Rodrigo Borgia therefore she was forced to face a long trial. When Borgia lost his power and his domains she tried to claim her lands in Romagna, but the citizens of Forlì, who hadn’t forgotten her cruelty and strong manners preferred the Ordelaffis to come back.
She eventually gave up ruling over the Romagna region forever.
She moved to Florence, almost being considered as an hostage of De’ Medici family, she dedicated herself to her children education and her alchemy experiments. 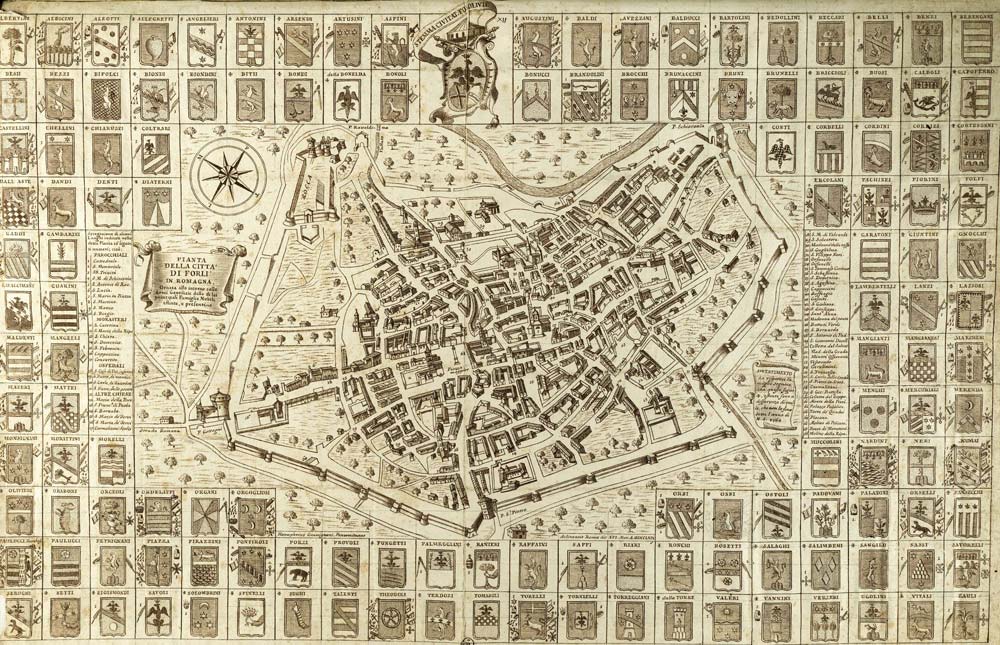 She got sick and died of pneumonia. She was buried in the Murate cloister in Florence, but her grave has been lost unfortunately.
The Tiger of Romagna became a legend for the posterity